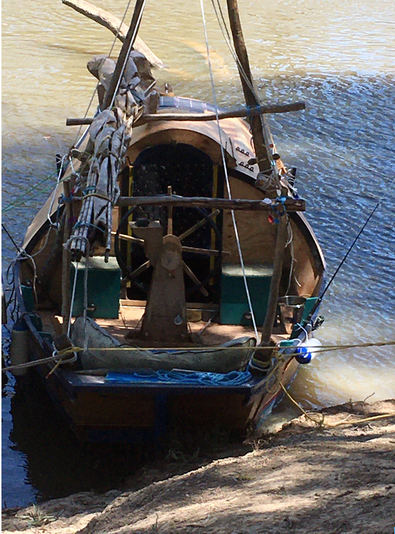 Down River to Somewhere

We put in at the Torrumbarry Weir, on the Murray River, Victoria, Australia, amidst wake boats and jet skis and fast things, amidst wind gusts that cracked and the trees that swayed, amidst weir lights, port and starboard, amidst the ring of steel coming down, the winds roared and the boats moved on the water from side to side. Thunder and lightning very very frightening.

We launched the three, The Smigglepot, The Sneaky Snag and me, The Wanambe. For the slow boat to cruise downstream past Cohuna and gunbower to somewhere. 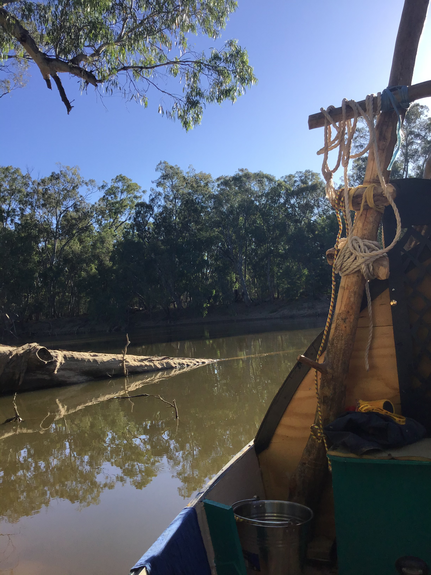 8 am we were ready to sail, from 1634 we glided past Dead Mans Hole and I wonder who died there ,past Norris Bend and we shimmied past the cutting at Toongabbie, with the hellish history from Ireland, past the Swan Lagoon, past the forgotten wharf at Old Cohuna where the river highways were full of trade and inland transport. In Recent centuries the paddle steamers plyed from wharf to wharf receiving and dispatching goods and people. For thousands of years before that the rivers were full of traditional canoes made from the bark of trees that travelled the length trading and commuting, we pass Mopoke Bend.

Wild pigs on the riverbank near Kate Malone Bend where we stop for the day. The electric battery provides beautifully. Today we travelled 32 kms.battery level at 32%. Full sun now shining on the panels so expect to be fully powered up by the morn.

At sundown on the Tuesday 17 th of November, Wanambe had 59% charge, not my expectations I was hoping for more, so what a delight to know that tomorrow we cannot travel too far. This means exploration of the banks.

On any day Australia’s water is sold like a commodity to foreign investors.see below. One of the many large international monoculture companies that profit from our water is Olam. A big mover in nuts, cocoa, coffee and cotton. So they had some spare water and have sold it to a Canadian pension fund to make more profit.

SINGAPORE (THE BUSINESS TIMES) - A unit of Olam International is selling 89,085 megalitres (about 89 billion litres) of its permanent water rights in Australia to a related entity of the Public Sector Pension Investment Board (PSP Investments), one of Canada's largest pension investment managers, for A$490 million (S ...Dec 3, 2019
These are the words from the Singapore Paper. Straits Times.

How did we get to the point that we are corporatising our water. It is no longer attached to land….anyone can now buy our water. Even though we are the driest continent on the earth…..

Meanwhile I am on the river that they are selling. Soon boats won’t be able to ply the rivers unless an irrigation flush is ordered and sent down. This is madness.Not sure what the fish and all the other critters that live along the watercourses think.

Family farms matter, water for consumptive use matters, water for our wetlands and rivers matter. Large mono culture international corporations do not matter to me but they do to our national political leaders who bend over backwards to get their buddies a good deal. Meanwhile, we on the rivers and wetlands are witnessing a devastating decline in ecosystems before our eyes. Just as the wild places of the world are diminishing so are ours in Australia.

Through the worlds only Redgum Forests (Eucalyptus Camaldulensis)
We shimmy through the Pericoota State forests edges on the north banks and on the south banks Gunbower State Forest. The bird life is incessant, hardly a moment of silence.

Past Stanton Break at 1596 and the Dead River Lagoon, onwards past Gravel Bend at 1568 and our stop for the night is at Social Bend at 1576, where we three vessels will be social.

Koondrook / Barham is only 50 kms away so we think that we will arrive in 2 days. Im looking forward to going back to Barham, it is a place of wonderful memories and great learning for me. I arrived there over 40 years ago to build the Paddle steamer Emmylou and I am so proud to still see her plying the Murray River regularly.

So our journey to somewhere continues down river. I hear singing from the Sneaky Snag, I hear snortling from the Smigglepot.
All is as well as can be on this most amazing river system,

So until the next chapter of my Captains Journal

A mob of 15 or so kangaroos run thru the bush, a snake swims from one side of the river to the other, swirling and curling and pushing itself forward with its body. Cockatoos screech and call out from high, crows let each other know that a boat approaches, Nankeen Night herons move from one camouflaged limb to another, Sacred Kingfishers dive into the water to catch fish, it really is a wilderness and it is right at my back door. Pairs of ducks are dotted on the water and I feel glad that they are safe, no shooting of native birds on the Mighty Murray unlike most of the wetlands in Victoria where duck shooting is rampant.

The banks of the river erode as water levels rise and drop. With each flush of water that is being delivered the muddy clay sides slip into the river. Many bends of the river have no growth to prevent erosion, the grasses all gone and trees washed away. In places the blackberries are thick and flowering.Pattersons curse and thistles abound and I have not seen river mint (Mentha Australis) nor old man weed (Centipedes Cunninghamii )

We could do with a River Revegetation Army to reveg the banks and keep the riparian zone healthy and able to withstand the constant rise and fall of the waters. Now that’s an idea..must speak to Our PM. Haha!!

I can imagine what this river would have looked like a couple of centuries ago, reeds, grasses, rushes, herbs and creepers amongst the gumtrees and wattles holding tight on the banks as canoes glided down the river.

The Sneaky Snag with Carol and Marion onboard have gone ahead to find a sandbar. We are all sandbar hunters today.Smigglepot with Terrance at the helm cruises at around 4 km per hour with us.

One young man on the bank called out and said we were “living the dream”. He had a good looking camp on the go ready for the weekend revelling while the white faced herons flopped onto a tree.

In some places it feels so wild that a crocodile or a hippo might slide into the water. It’s often referred to as the Kakadu of the south. It is a beautiful world we live in when we are out here.

My zeer pots are working a treat, they are keeping fresh stores at a cool temp and allowing us to eat well. I love the simplicity of them. A terracotta pot inside a terracotta pot with sand in between the two and damp cloths on top of the lids to create evaporation. No electricity needed.

A swamp wallaby gently makes its way down the river bank and sips water from the edge. We had lunch at Cemetery Bend, saw Graham’s Hut and the old Gray,s mill site, then stopped for the day with 27 % battery at 1554 where we had a swim and threw out a fishing
line.

We have lost contact with Sneaky Snag. No ph, no internet, sos only. She is way ahead of us on a sandbank somewhere between 1552 and 1550. We are not sure where we are again as the NSW Maritime km markers are missing. I bet that Sneaky Snag is just around the next bend.

But time for Wanambe to kiss the sun and recharge for tomorrow’s cruising. Koondrook and Barham tomorrow . According to the schedule that we do not have, we are right on track.

The sails are working well, leaning into the wind and able to move easily as we motor sail into each bend. With the sails only we have reached 7 km per hr. But generally we have bedded into the 4 km per hr speed. A perfect style for Wanambe.

A lone bright pink inflatable flamingo was stuck in branches floating aimlessly while a butterfly caught a ride on a gum leaf and was floating downstream. It’s all go on the river. Mobs of White Winged Choughs gather for their family meetings.

So tonight we can’t quite agree where we are on the charts and the Murray Rivers character show her diamonds on the water. That’s all for now aside to say that every night from Torrumbarry to here a mopoke calls.

So until the next entry
I will Sign off.
Gathering spots by the river
21st Nov.2020

Down river to somewhere
Big day. We ended up in Koondrook at the designer wharf where speed boats seem to have no speed limit… we bounced around and the boats tangled into each other and the wharf as the waves came to shore.
It ended up that we were sitting at 1546 and sneaky snag was at 1544.we met in Koondrook like old friends who had not seen each other for ages.

I am a year older when I wake up. Staggering how those six decades plus a few years has swept me up. What a ride so far…
I saw my first Southern Aurora in Barham when we were building the PS Emmylou. What a sight, the emerald green swirling and the diamond pin points coming and going. I think my life is like that: a southern aurora of a life. I can’t sleep and it’s 1.42 am. The Willy wagtails are serenading like Australian Nightingales and the town noises are interesting to listen to. The dogs barking, the electric pumps and hum of the town, the reed warblers and ducks, all chorusing to the crescent moon going down.
The ropes on the boats rubbing on the cleats, the creaking of boats that are moored in port, the outboard motor on a tinny, the fast running sweep of a river as it swiftly gurgles past the wharf pylons, the galahs rumbling and fighting amongst each other, the late night river party goers laughing and singing a couple of bends away,the gentle breeze making things tinkle.

I reckon under the Koondrook Wharf is a big hole with a big fish in it.i put the rod in with some cheese on it and bang ,got a bite quite quickly. But alas it’s a story of the one that got away.
It’s overcast, not a star in the sky and we apparently have a 80% chance of 1 ml of rain. It could piss down, not.
I saw a few things that peeved me today, the jet skis going really, really really fast like they are on the auto barhn, the familiar blue disposable face mask moving at great knots downstream, the toilet paper where people shit and can’t be bothered to bury it.

There will always be ignorant people that don’t see why looking after our natural world is important, not for me, I am always compelled to keep what little of nature remains and add to it.
So until he next chapter of what is becoming my daily river journal
I will sign off.

Get those sheep away from the riverbanks